Heroin in Dallas, Fort Worth, and North Texas: All Kinds of Felony Arrests Are Possible

This month, new national research studies are warning once again about the dangers of drug overdoses, both from prescription drugs (think Oxycodone and Vicodin) as well as illegal drugs like heroin. The Centers for Disease Control and Prevention (”CDC”) also released a new study on heroin use in the United States, and the results are similarly disturbing regarding how many people are dying from heroin overdose deaths as well as from prescription pain pills.

According to the CDC study, the number of heroin overdose deaths jumped 300% from 2010 to 2013 in the United States. Included in the CDC findings was the explanation given by drug users about the skyrocketing popularity of heroin. The users explained they had switched from prescription pain medications like Oxycodone to heroin because heroin is cheaper than pain pills and heroin is also easier to get.

Which just confirms the warning we gave here in our earlier post, “Heroin And Money Laundering In Texas – Expecting More Charges In 2015.”

As we pointed out there, when someone in Dallas can buy heroin at $10/pill versus oxycodone at $80/pill, then it’s safe to think that they are going to opt for the heroin, right?

Bottom line, according to the CDC, people are overdosing on heroin at a rate of 23 per day according to their estimates and in 2013, the highest number of heroin overdose deaths was among whites between the ages of 18 and 44 years of age.

Heroin in Dallas and Fort Worth: All Kinds of Criminal Arrests

Heroin comes to Dallas and Fort Worth and the rest of North Texas from Mexico.  It’s a huge and growing business run like any other commercial enterprise.

Heroin is a Growing Product Line in U.S. Drug Industry

Distributors and wholesalers and regional sales managers exist for the heroin trade here in North Texas just like they do for other goods, like refrigerators, computers, and potato chips. See, “The Heroin Crisis: A 3-Day Series: The path of the plague,” published in the Eagle Tribune and  our post “Heroin is a Business in Texas: Growing Heroin Demand Means More Heroin Busts in 2015.“

Lots of people understand the reality of this business and are trying to build public awareness of the heroin marketplace.  For instance, here’s a synopsis from a new book by journalist Sam Quinones entitled Dreamland: The True Tale of America’s Opiate Epidemic:

Over the past fifteen years, enterprising sugar cane farmers in the small county of Xalisco on the west coast of Mexico have created a unique distribution system that has brought black tar heroin–the cheapest, most addictive form of the opiate, two to three times purer than its white powder cousin–to the veins of people across the United States. Communities where heroin had never been seen before have become overrun with it. Local police and residents are stunned: How could heroin, long considered a drug found only in the dense, urban environments along the East Coast, and trafficked into the United States by enormous Colombian drug cartels, be so incredibly ubiquitous in the American heartland? Who was bringing it here and why were so many townspeople suddenly eager for the comparatively cheap high it offered?

As we’ve warned about before, here in Dallas the use of heroin in young kids (think middle school and high school) is higher than many people around here realize. Ditto for young adults in local junior colleges and universities around our area, and for adults in middle class suburbia.

Heroin, meanwhile, remains a serious felony here in Texas.  Get caught with any amount of heroin in your possession, custody, or control – think dust particles, even — is a crime tied to serious jail time.  It’s a felony.

Add to that the overlap between heroin use and other serious crimes and bad happenings.  Share heroin, for instance, and you risk a distribution charge.  That’s a very serious felony.

Use heroin and get in an accident, as the new TAH Report (above) analyzes, and you’re involved in a serious accident with severe injuries or even death.

Heroin does count as driving while intoxicated — Texas law does not distinguish driving under the influence of alcohol and driving while high.

If  someone is high on heroin and is in an accident while driving their car (or SUV or minivan), then they may face charges of vehicular manslaughter if someone dies in that crash, the same charges that a drunk driver would face who had crash with an over-the-limit BAC.

Additionally, arrests related to heroin here may not be based upon possession charges as much as things like money laundering, structuring, and drug-related felony distribution.  These are the arrests that are made in connection with the business of heroin itself.  Prosecutors are charging people here who they believe are involved in the business of heroin as a product and they use crimes on the books, like structuring, to thwart the commercial heroin operations.

For example, in July 2013 there was a big bust down in Laredo, where the federal authorities arrested 24 people for money laundering charges as well as distribution of heroin, cocaine, and methamphetamine (i.e., conspiracy to possess with intent to distribute).

Make no mistake:  while public awareness may not be high regarding how popular heroin use has risen in the Dallas – Fort Worth metroplex and all of North Texas, the local, state, and federal authorities are well aware and working hard to investigate, arrest, and charge people on heroin-related felonies under either state or federal law (or both).

Right now, there is a joint effort organized here as the North Texas High Intensity Drug Trafficking Area (” North Texas HIDTA”) whose stated mission is to “… reduce the availability of illicit drugs and drug related violence by attacking, disrupting, dismantling, and destroying drug trafficking organizations throughout the North Texas HIDTA, and by arresting and convicting principals, seizing their contraband and assets, and reducing the demand for drugs in the region.”  Members of local police departments and state agencies like the Texas Department of Public Safety are part of HIDTA working alongside the FBI, ATF, Immigration, and other federal agencies. 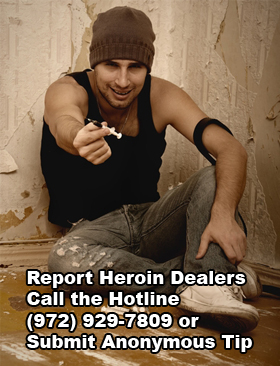 They are working hard in our part of the country to find and arrest those involved in the heroin business.   HIDTA has even put up billboards around Dallas and Fort Worth, asking citizens to call and report people they suspect are heroin dealers.  See, “HEROIN ARRESTS IN DALLAS AND NORTH TEXAS: BILLBOARDS, BIG BROTHER, AND CIVIL RIGHTS IN HEROIN CASES.”

Which means this:  as heroin grows in popularity here, there will be more profits to be made and the heroin business will expand so supply can meet demand.  It’s economics.  Law enforcement will react by increasing its efforts to thwart this economic expansion.  We’ll see more efforts like that billboard, and there will be more coordinated investigations like the one that resulted in the 24 people being arrested in Laredo.  And we’ll also see more arrests involving heroin users as they are charged with things like possession and distribution, as well as heroin-related arrests like DWI charges.

For more about heroin and drug crimes, visit our resources page.