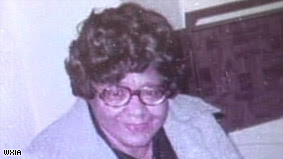 Kathryn Johnson was 92 years old, and still able to live in her own home over there in Atlanta.

From this small fact we know that Mrs. Johnson had to have taken pretty darn good care of herself – physically, financially – in order to avoid nursing homes, or worse.

So, we’re respecting Kathryn Johnson right now, right? We’re thinking – boy, when I’m 92 years old, I want to be living on my own, doing my own thing. You Go Girl! Right?

Sure we are. We like and respect Mrs. Kathryn Johnson. Look at that sweet face.

Well, here’s one more fact about Mrs. Kathryn Johnson for you: when she heard someone trying to get in her front door back in November 2006, she pulled out a rusty old pistol she had in the house, and fired one shot through the front door – high, where it would go over their heads.

After all, Mrs. Johnson didn’t live in the best of neighborhoods — she lived in downtown Atlanta, where there was crime and where home invasions occur. Old Mrs. Johnson was ready for them.

And, right after she took that shot, THIRTY-NINE shots came back at her, through her home’s front door. That’s right: 39.

Kathryn Johnson was hit with five of those bullets, and died there in her front entryway.

We’re upset now, right? Our sweet, strong and sassy Mrs. Kathryn Johnson lies shot – dead – in her own home, a woman who deserved the utmost of dignified passings?

You bet we’re upset. And, it’s gonna get worse now: because three Atlanta cops have admitted that they were the ones who snuck up to the home of Mrs. Kathryn Johnson and without so much as a by-your-leave, killed her.

Illegal No-Knock Search – it was an invasion of her home

That’s because they got an illegal no-knock search warrant for her house, and started breaking in her door without giving her any warning. No wonder she thought that her home was being invaded: it was.

Cop stuffs marijuana that he conveniently has with him in Mrs. Johnson’s house to cover up

And, after these bad cops discovered that they had done a Very Bad Thing, one of them (officer Smith) planted marijuana in her home to try and support their defense that this was a drug house. Right. (I’m wondering where Officer Smith had such a ready source of pot to just grab and toss into Mrs. Johnson’s home, aren’t you?)

What’s Their Story? They had a quota to meet (I kid you not)

Sure, they’ve got one. These cops have said it’s not their fault because the whole Atlanta Police Department is just so, so bad that it is really to blame.

You see, they had quotas to meet (9 arrests, 2 search warrants a month) or they risked being transferred. They just had to meet these performance quotas.

And, apparently, at the Atlanta Police Department, officers routinely lied about things, breaking all sorts of rules. So, they just went along with the practice. To meet their quota.

Well, quota-schmota. These five cops just got sentenced to a range of 5 to 10 years in federal prison, and they’ve still got to face sentencing in state court on state law charges.

Officers Smith and Junnier have expressed remorse. Smith says that he prays for Mrs. Johnson daily, and Junnier hopes that other cops will have more backbone than he did. Junnier is quoted in the Atlanta paper as saying “I used to think I was a good person.”

That’s what corrupt institutions do -they corrupt the people within them.

Because from her death, Kathryn Johnson has brought a national spotlight upon a corrupt police department where investigations continue and other arrests by both federal and state authorities have been, and will continue to be made.

And somehow, I think Mrs. Kathryn Johnson would be mighty proud of that.

Bless your heart and rest in peace, ma’am.